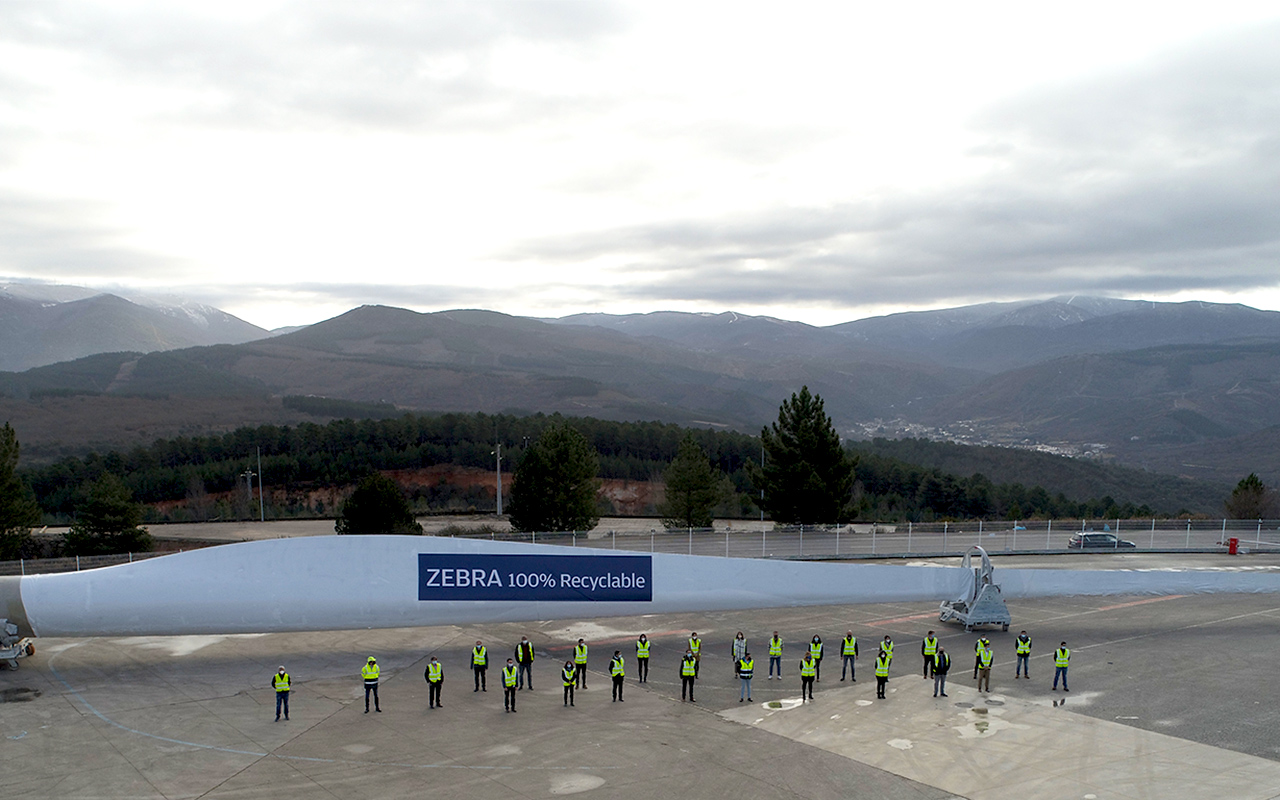 The ZEBRA (Zero wastE Blade ReseArch) consortium on March 17 announced a new step forward on the industry’s transition to a circular economy with the production of the first prototype of its 100% recyclable wind turbine blade. The 62m blade was made by LM Wind Power, using Arkema’s Elium® resin, which is a thermoplastic resin well known for its recyclable properties together with the new high performance glass fabrics from Owens Corning.

Launched in September 2020, the ZEBRA (Zero wastE Blade ReseArch) project is a unique partnership led by French research center IRT Jules Verne and brings together industrial companies including Arkema, CANOE, Engie, LM Wind Power, Owens Corning and SUEZ. Its purpose is to demonstrate the technical, economic, and environmental relevance of thermoplastic wind turbine blades on a full scale, with an eco-design approach to facilitate recycling.

Within the project, LM Wind Power has designed and built the world’s largest thermoplastic blade at its Ponferrada plant in Spain. This milestone is achieved after a year of material development and testing backed by sub-component level process trials by the consortium partners.

The liquid thermoplastic resin is perfectly adapted for the manufacturing of large parts by resin infusion, combined with Owens Corning high performance fabrics. The resulting composite material is delivering similar performances to thermoset resins but with a key unique benefit: recyclability.

Elium® based composite components can be recycled using an advanced method called chemical recycling that enables to fully depolymerize the resin, separate the fiber from the resin and recover a new virgin resin & High Modulus Glass ready to be reused, closing the loop.

This method, developed by Arkema and CANOE partners, are tested on all composite parts including waste generated from production. Owens Corning is also in charge of finding solutions for fiberglass recycling through remelting or reusing in various applications. In addition to material testing and process trials, the companies have also made progress on developing and optimizing the manufacturing process by using automation, to reduce energy consumption and waste from production.

“With this project we are addressing two crucial industry challenges. On one hand, we are progressing on our Zero Waste Blades vision by preventing and recycling manufacturing waste. On the other, we are taking blade recyclability to a new level: the end-of-life thermoplastic composite blade material has high value in itself and can be readily utilized in other industries as material compounds but can also be depolymerized and the resin reused in the production of new blades,” states John Korsgaard, Senior Director, Engineering Excellence, LM Wind Power.

LM Wind Power will now start full-scale structural lifetime testing at its Test and Validation Centre in Denmark, to verify the performance of the composite material used in making the blade and its feasibility for future sustainable blade production. Once these tests are finished, the End Of Life recycling methods will also be validated. The next steps are the recycling of production waste, the dismantling and recycling of this first blade and the analysis of the test results.

“Work on the ZEBRA project is progressing according to schedule, which has all the necessary expertise for the deployment of sustainable thermoplastic wind turbine blades. The manufacture of this first blade is a great success for the entire consortium and for the wind industry in general," said Céline Largeau, Project Manager, IRT Jules Verne.

By the end of the project in 2023, the consortium will have met the challenge of bringing the wind energy sector into the circular economy loop in a sustainable manner, according to the principles of eco-design.