On the leading edge: Innovative solutions to reduce rain erosion

As Lead Engineer for LM Wind Power’s Materials Qualification and Technology Department, Michael Drachmann Haag knows the erosion challenge well. “Ten or even five years ago, leading edge erosion mostly occurred in the most extreme environments, such as the west coast of Scotland where blades faced massive amounts of rain and wind,” he said. “But, in the hunt for improved cost of energy through higher tip speeds, leading edge erosion is becoming much more dominant.”

Michael and his team chose to face the erosion issue head on — presenting on this topic at the 2013 European Wind Energy Association (EWEA) annual event in Vienna and continuing today as a leading industry voice on erosion obstacles and solutions. As the world’s leading supplier of wind turbine blades, LM Wind Power engineers are on the forefront of understanding the erosion challenge, developing tested and reliable leading edge solutions and advocating new design standards for the wind industry.

Understanding the erosion challenge
So, why is erosion on the blade leading edge a problem? As always, reducing the cost of energy is key.

During operation the leading edge is exposed to wear and tear over time, which results in blade material surface deterioration and increased surface roughness — and thus reduced annual energy production (AEP). This leading edge surface erosion increases dramatically with increased rotor speed. Additionally, certain wind turbine environmental conditions — such as rain, hail and particle impacts — can cause leading edge erosion if the blade is unprotected. And as luck would have it, one of the world’s largest wind markets, China, is also home to severe monsoons.

“Ten years ago, suddenly the industry moved away from our comfort zone of mainland Europe, facing offshore and Chinese locations with three or four times as much rain as we’d seen before,” Michael said. “We are beginning to see erosion as one effect of these new environments, which requires building and designing materials to withstand higher impacts than our previous materials.”

Developing tested and reliable leading edge solutions
With this clear market trend toward higher tip speeds and expansion into markets with extreme weather conditions, preventing erosion is essential to prolonging turbine lifespan and securing the lowest possible cost of ownership.

To test the system in extreme operational environments, LM Wind Power conducted a reliability study of more than 1300 blade leading edges from numerous sites.  As a result of the reliability study, our engineers have defined more demanding test protocols to obtain a full understanding of what happens to the materials in use during a blade’s entire lifetime.

Advocating new design standards
Erosion is an industry-wide challenge, but currently there isn’t a global design standard for erosion on the leading edge. Michael and his team want to change that.

“At LM Wind Power, we actively seek erosion solutions and invest in those solutions,” he said. “We are asking all the questions — particularly, why are there no standards?”

“For example, in China the monsoons will bring a lot of rain with very large droplets, while in other parts of the world it will rain less and in other places it will hail,” Michael said. “The industry needs a standard way to describe this outside world.”

Located next to LM Wind Power’s in-house wind tunnel in Lunderskov, Denmark, the Rain Erosion Test Center allows us to continue our track-record of rigorous blade testing. We also work with other industry players to influence certifying bodies to adopt standard testing requirements around the world.

“It’s like fatigue testing of a full blade: it’s a standard now, and everybody needs to do it in order to certify a blade,” Michael said. “LM Wind Power’s level of rain erosion testing is not something we want to keep to ourselves; this is a significant industry challenge, and everyone should have to conduct rain erosion testing up to the same level.”

Moving forward: small steps and giant leaps
With blade lengths and tip speeds increasing as never before, leading edge erosion is one indicator of the challenges that arise when breaking onto new frontiers. But trailblazing isn’t supposed to be easy. Blade engineers are innovating on the edge of technology, to define the loads the leading edge may face over its twenty-year lifetime.

“Add-ons for blades are like software upgrades for a mobile phone: when an upgrade comes, suddenly the appearance, functions and battery lifetime are improved,” Michael said. “When we design blades to reduce leading edge erosion, there will be leaps in technology but there will also be incremental change. We will do both.”


*We originally wrote this article for the November 2015 issue of Power and Energy Solutions (PES) magazine. View the publication 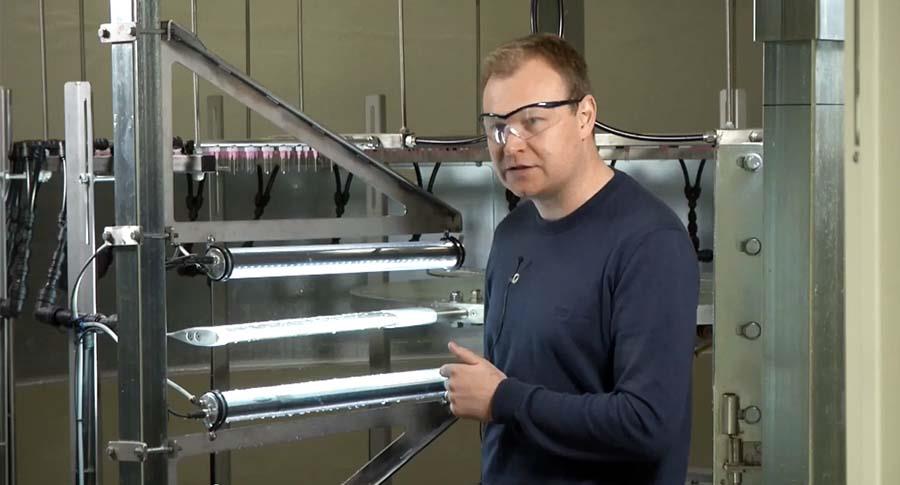 The Rain Erosion Test Center tests the endurance of our protective coatings on a glass fiber specimen shaped like a blade leading edge. Three whirling arms rotate at high speeds under an artificially-generated rain field, with a rotational speed of 234-640 kilometers per hour (145-398 miles per hour)!